Learnings from Day 4 of the Diwali Run in November 2018

November 13, 2018 · 4 min read
Today we had pottery workshop. Nitin had arranged for clay and person from dharavi. I was not there for most of the time. But looks like older kids enjoyed it a lot. There were few who wanted to explore more and wanted to work on the wheel all by themselves. But as usual I think the younger ones and few older ones were better enjoying it outside.
What I heard from others is potter was under performance pressure and he wanted kids to make best possible pot. So in turn, he did more job rather than kids, which was not the moto. So Nitin’s idea is that maybe we should have such thing in learning centre so that they can have hands on. Unless the kids watch it at least once, they may not figure out whether they are really interested. So, Maybe experts can take introductory sessions. But then children should spend time by themselves so that they explore more. Also, there needs to be minimum number (3 or 4) so that we go ahead with that activity.
After a while many of them started playing football. Sarang was explaining rules to the other kids, and people were not much interested in listening to him. Once he also had to face the question like why should we listen to you. Kaveer-Nehan-Sarang was strong team. Prehan-Neev objected that the bros cant be together in single team as they already have strategies in place. Karthik also knew how to play, but he was younger. In one of the matches, sarang’s team lost. Then Saranga-Nehan-Kaveer-Prehaan was the team Vs a team of 10. And still they won. People accused them of lot of cheating. Girls also wanted to participate. But according to Kavya they needed to get another ball to play with because boys were not giving them enough chance.
Today Mahaniya was absent. Instead Iva had brought her skates. She and Divija took turns to skate. Sometimes each of them wore a single one and practiced for a while. Iva can climb down the stairs with skates on.
Arpita had come up with some vocabulary game. She tried to include all of them together. But it was tough time for us to make them sit in a circle, even for explaining them what is all the game about. I used my dafali, somehow kids sat. She had bought some stationary material. 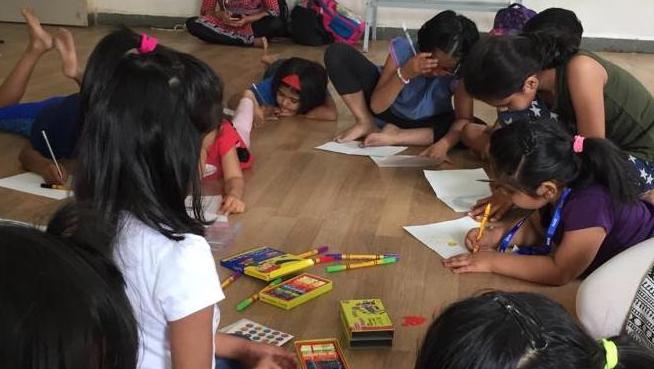 But the biggest hurdle was to make kids share the stuff. She had got around 6 pencils. And we had around 18 kids. So with help of everyone, she set the rules. Once, the person will request to share, followed by 2 warnings, followed by time out of 10-15 min outside our room (in quiet area) Rajitha had demarcated the quiet zone on upper landing but it was hardly used. But this trick worked to some extent. Either the person who was not sharing shared things reluctantly or by the time someone complained to us, and we intervened, someone else in the group acted helpful and shared his/her material. Arpita had asked them to draw/colour their favourite cartoon. So we had a variety of them. From dragon (how to train ur dragon), Thomas, iron man, to some imaginary faces and figures to just simple scribbling and putting on smiley stickers. There were kids who wanted entire sheet of smileys. They just kept on pasting those on their drawing paper, making me restless. But Arpita proved that sticking so many smileys doesn’t make drawing beautiful, in the first place, and in the second, they were so close to each other that one couldn’t even draw the body parts to them, just in case, to convert them into any figure.After drawing was the real vocab activity, where they were supposed to speak about their character. E.g. Ananya had drawn Pakshita, from Goa, who loved chocolet rice and was Veterinary by profession.

So few concept building efforts were done around all these words. But then kids suddenly lost the interest in the activity and escaped one by one saying they were hungry. We tried to plead them to sit for a while, but no success. Then we understood what it is, left them. The interesting tiffin-boxes attracted more numbers, those not so interested in food were enjoying playing. Hriday was having his food. Chinmayi-Nandita wanted to play his rolly-polly. I asked them that you request him. They did. To our surprise, he too offered it to them.


Post lunch except for a few all were down playing football. Myrah was just hopping up and down. She was in charge of accompanying small kids (actually, of her own age). Today nobody asked me when they are going to be picked up. None of them expressed great excitement to see the parent. Asmi did not cry a bit. Hriday was very reluctant to leave. Kids showed their clay work to their parents and picked up their own pot. Asmi couldn’t find any. There were a few who had made more pots. Myrah readily gave away hers to Asmi.The day ended.

Definitely we had progressed. By now, kids knew that they can do what they want to, sticking to 2 rules, they cant touch anyone else, and if requested they have to share the common things. ?

A
Merton 3 years ago

So many people have come up to me to ask is australianwritings legit and I have always told them to read the review for it. We can see if they kept all of promises that they make.